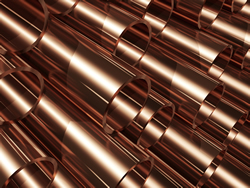 Investors who have been concerned about the long-term viability of copper can put their concerns to rest, as the outlook on its value is quite strong. Prices are currently volatile, owing in part to the European debt crisis, but copper is still a smart investment in the medium- to long-term in large part due to a limited supply across the world. In short, the upside on copper is tremendous, and prices will likely rise following the resolution of Europe’s financial troubles in the future.

Fundamentals of the Copper Market Remain Strong Due to Continued Demand

Copper is a basic resource, and is used heavily in the construction industry — it is even used in the production of power lines — which is itself a driving economic force. The fact that copper supplies are limited internationally means that its price remains high despite global financial turmoil. The cost of copper production is small but is itself inflated due to the realities of supply and demand, raising the commodity’s price on the whole. This is part of the reason that the price of copper recovered faster than many other commodities after the recent U.S. financial crisis.

When it comes to refined copper, the global market has sent mixed signals. China — the largest consumer of copper in the world — has seen its imports of the metal increase by 41% in the first half of 2012, though speculation is that this is more due to restocking than anything, as China’s overall demand for copper has slowed. This is expected to change as the government’s economic stimulus plan is implemented. Meanwhile, demand is Europe has decreased, and has stayed flat in the United States.

Despite some short-term instability, copper is still a sound investment, and its worth is expected to increase in the medium- to long-term. At B.L. Duke, we help companies in the Chicagoland area with comprehensive scrap metal processing and brokering solutions, including ferrous and non-ferrous metals. Contact us today for more information or to schedule an on-site consultation.

The U.S. Manufacturing Economy Continues to Expand
Scroll to top