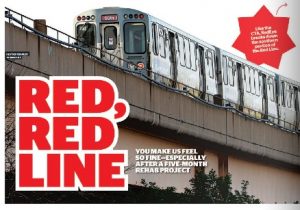 In early May 2013, B.L. Duke was contracted to recycle the old Chicago CTA Red Line. B.L. Duke was heavily involved in the beginning phases of the Red Line Reconstruction project. During the demolition phase, not only did B.L. Duke complete their scope of the project on time and on budget, but also reused and recycled every part of the old rail system. The steel rail components were recycled into new steel and the old wooden ties were ground and used for fuel in power plants.

According to the Chicago RedEye, the Red Line was shut on down on May 19th, 2013 and officially reopened this past Sunday, October 20th at 4:00AM. Now that the project is finished the Red Line operates at 55mph instead of 15mph in slow zones – up to a 20 minute faster commute between 95th/Dan Ryan and Roosevelt. A commuter, Aubrey Jones, told the Chicago Tribune “her commute took 20 minutes on Monday, down from 35 minutes before construction.”

Please contact us at B.L. Duke today for more information on how we can help your company or municipality recycle.