At this time last year, we had a lot to be optimistic about. In 2017, the market rebounded moderately with continued growth after a tough 2016 market.  Now, we are a couple months into the new year  and are predicting a bright 2018 outlook for the scrap metal industry.  Markets kicked off with a generous increase of $30/gt for cuts and $20/gt for primes.  We saw a little sneak preview of a similar boost back in December.  As history shows, January typically tends to be a strong month, while February falls flat.  However, buyers, sellers, and brokers are particularly bullish.

Towards the end of 2017,  Nucor’s DRI (direct-reduced iron) plant in St. James, Louisiana was forced to halt production due to an unforeseen outage.  This forced Nucor to consume more scrap than expected, driving ferrous scrap prices upward.  Recent inclement weather is another reason to give confidence in a forecasted increase.  The Midwest and East Coast were stricken with tough winter conditions within the last month.  Considerable amounts of snow and frigid temperatures made for logistical disasters and a slowdown of operations.  Supplies are low, driving for high demand. According to ISRI (Institute of Scrap Recycling), other factors adding to  an uplifting market are potential trade remedies from Section 232 steel investigation and other trade cases, steel production cutbacks in China, recovering iron ore prices, healthy domestic order books, and the new corporate tax cuts. 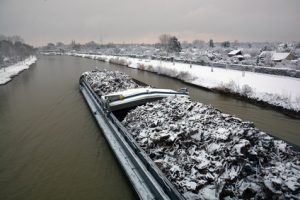 Heading into the new year, the biggest concern in the scrap industry seems to be China’s ban on scrap imports.  Mid 2017, China caused an uproar by announcing their plans to the World Trade Organization (WTO) to tighten their threshold of impurities on scrap imports, unlike the rest of the world that follows the global standard.  “ISRI is very disappointed to see the Chinese government finalizing its Environmental Protection Control Standards and failing to take the opportunity to bring them in line with global standards that reflect manufacturing requirements and are utilized by environmentally responsible recycling operations in the US and around the world,” ISRI president Robin Wiener said in a statement.  There are still many questions and doubt heading into the new year regarding the ban.  Learn more about China’s ban on our last blog post.

The Midwest Chicago market saw another change recently when the January AMM was released with “Historical” and “Expanded” pricing.  The change was put in place to start including 3 Indiana mills and an Iowa mill to justify logistical differences.  Both numbers will be released for the next 6 months, then will be down to one “expanded” category come June 30, 2018.  The new category will be listed the way it always has been, as “Chicago”.  Though expanded prices are showing higher right now, we believe sooner rather than later the prices will end up aligning, before the 6 month period is over.

“All of the fundamentals are in place to ensure a strong half of 2018!  Additionally, with hot band futures pushing north of $740,  it will be difficult for mills to justify pushing the scrap market down.”

What are your thoughts on the 2018 steel market? Comment below!