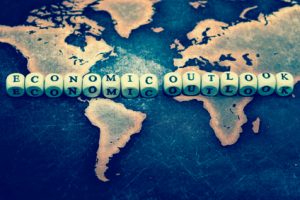 I attended the Precision Metalforming Association’s(PMA) 2018 Economic Outlook presentation by William A. Strauss on February 23, 2018. William is a Senior Economist and Economic Advisor at the Federal Reserve Bank of Chicago.

It is worth it to note that this presentation was delivered before the Section 232 announcement of tariffs on steel and aluminum imports to the United States on March 1st, 2018 by President Donald Trump. These tariffs between 10% and 25% could have a significant impact on the forecasted projections.

In 2017, the United States Real Gross Domestic Product(GDP) expanded by 2.5%. The Midwest economy is growing above trend in-line with the national economy. The Federal Open Market Committee (FOMC) is predicting the GDP to grow just above trend in 2018 and then with trend in 2019 & 2020. With the GDP expanding we saw the real value of the stock market reaching new highs.

While we are seeing the expanding GDP and stock market highs, we are also seeing a restrained recovery path of the Business Cycle compared to previous deep recessions. Recovery from both the 1974-75 and 1982-82 recessions saw an average annualized growth of 4.3%, while we are currently seeing an average annualized growth of 2.2%. Even with a lower average of annualized growth compared to previous deep recessions we are still seeing a low probability of a recession within the next two quarters. A growing GDP is an important indicator for the steel makers. An expanding GDP is illustrating a positive demand for the automotive industry, energy sectors and construction industry. 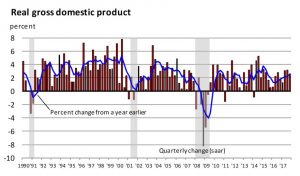 The Composite Index of the 10 Leading Economic Indicators continue to rise. The leading economic indicators usually change before the economy as a whole changes. They are therefore used as a short-term predictor of the economy. For example, S&P 500 Stock Index returns are a leading indicator. We will see the stock market rise before we see the economy recover from a slump and vice versa. Another leading indicator is Manufacturing and Trade Inventories and Sales which is a primary source of information on the state of business inventories & sales.

The United States employment increased by over 2.1 million jobs over the past year while the nation’s unemployment rate has fallen to 4.1%. With the increase of employment and the falling unemployment rate we are still seeing a significant number of unemployed Americans for more than 27 weeks. Illinois ranked below the United States as whole? Or compared to other states? as well as Iowa, Michigan, Wisconsin and Indiana in regards total employment change from the year prior. Illinois’ unemployment rate is .7% above the national rate. Wages and benefit costs continue to increase at a very slow rate. Slow productivity growth helps explain why even though we have seen a relatively strong employment increase we are not seeing that translate to higher wages. 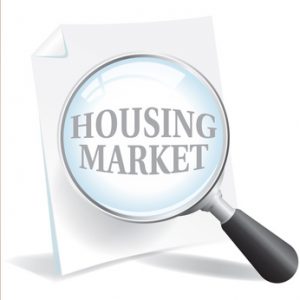 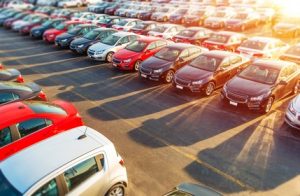 Light vehicle sales saw record numbers in 2016 but in 2017 we saw a slight dip of 1.4%. Continuing with the trend we saw light truck sales increase by 5% and passenger car sales were 11.4% lower. Alternative power vehicles, including hybrids, hold a very low market share of total sales. Blue Chip Light-Vehicle Sales are forecasting lower. 2017 saw 17,100,000 sales and 2018 is forecasting 17,000,000 with 2019 projecting 16,700,000 sales. US Aluminum foundry alloy premiums rely heavily on demand of the US automotive industry. The premiums started to slow at the beginning of 2018 but demand from large automakers is said to be sustaining the market. Aluminum sheet capacity is poised to grow in 2018.

The industrial sector saw strong output growth over the past several months. We are seeing supply managers’ composite index grow vastly over the past year. Chicago saw a significant reporting increase over the national average. While industrial production is forecast to improve it is likely to improve below it’s historical rate this year.

About the Author: Bobby Brown